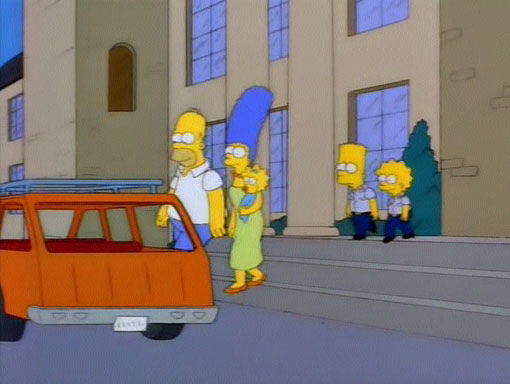 The Secret War of Lisa Simpson 08x25
Lisa joins the all-male military school where Bart is sent for discipline. Then comes the hazing. Homer's Enemy 08x23
A new plant employee who's had it tough resents Homer's lack of professionalism and his cushy life. Meanwhile, Bart buys an abandoned factory at an auction for a dollar. 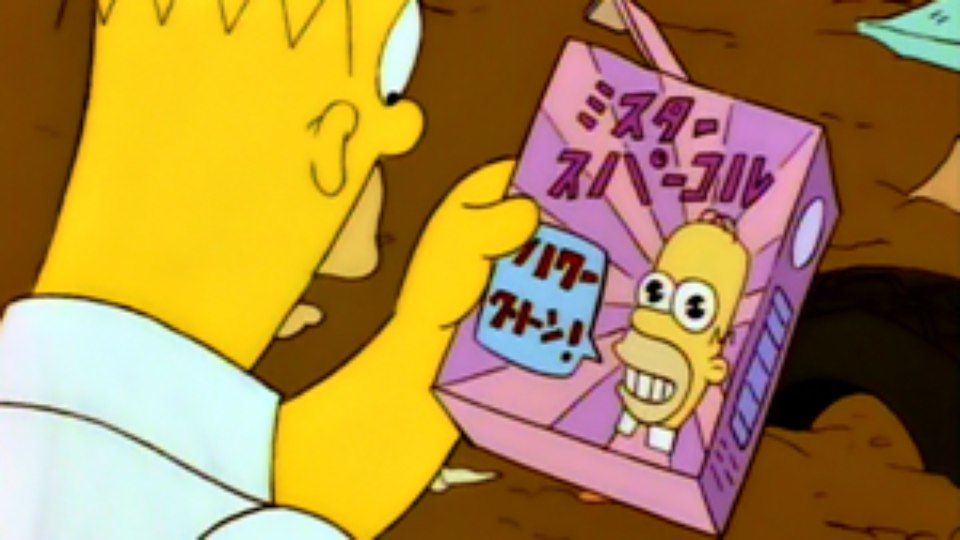 In Marge We Trust 08x22
Reverend Lovejoy puts Marge in charge of counseling parishioners; Homer finds his likeness is popular in Japan as the symbol for a cleaning product. The Old Man and Lisa 08x21
Penniless from bad investments, Burns asks for help from Lisa, who turns him into a profitable recycler. But then Burns takes things a nasty step further to increase his dividends. 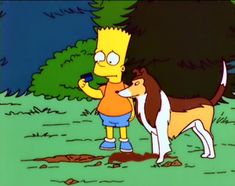 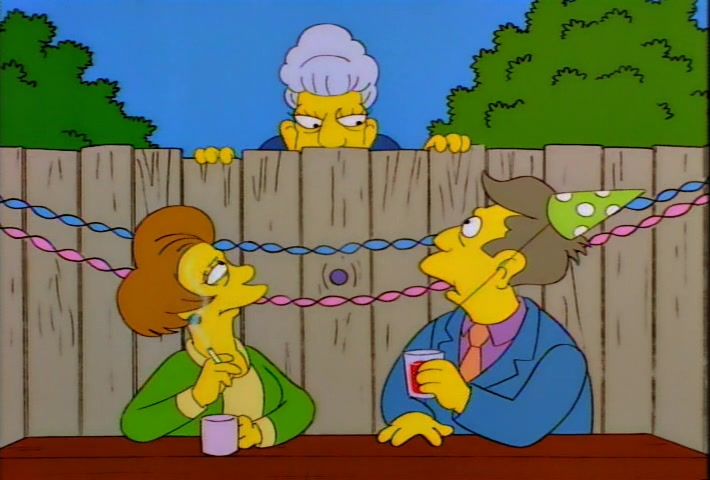 Grade School Confidential 08x19
After witnessing a kiss between Skinner and Mrs. Krabappel, Bart becomes their confidante. But rumors of their passion lead to their being fired---until Skinner reveals a secret. Homer vs. the Eighteenth Amendment 08x18
Homer becomes a bootlegger when Springfield decides to enforce a 200-year-old prohibition decree. 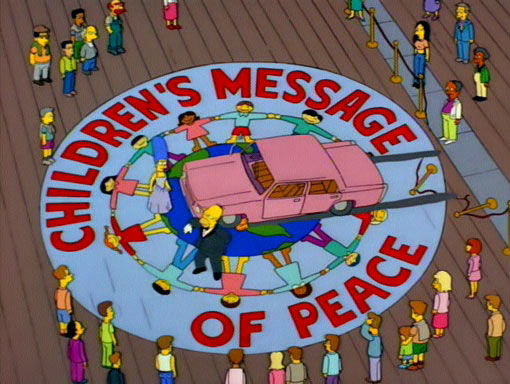 My Sister, My Sitter 08x17
Lisa's reputation as a first-rate baby sitter is jeopardized when she's put in charge of Bart, who's determined to make things tough. 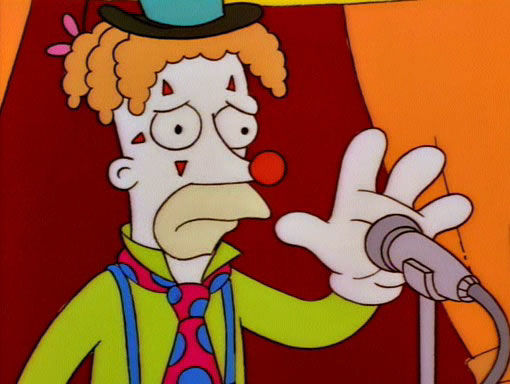 Brother from Another Series 08x16
Murderous convict Sideshow Bob (Kelsey Grammer) is released to work for his brother Cecil (David Hyde Pierce), whom Bob bested at the Krusty-sidekick audition. 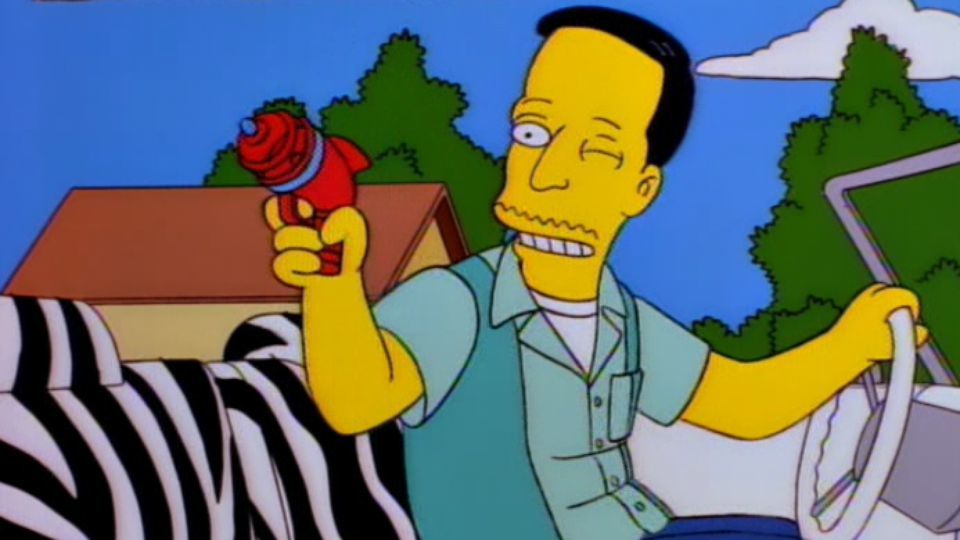 Homer's Phobia 08x15
Homer's fearful about the potential influence that the Simpsons' new gay friend may have on Bart. 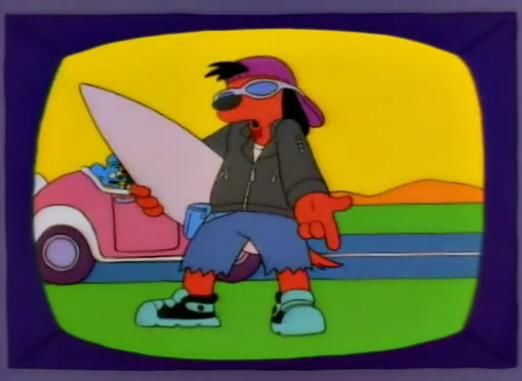 The Itchy & Scratchy & Poochie Show 08x14
Itchy and Scratchy creator Roger Myers picks Homer to be the voice of a new canine character---who is roundly rejected by the public. 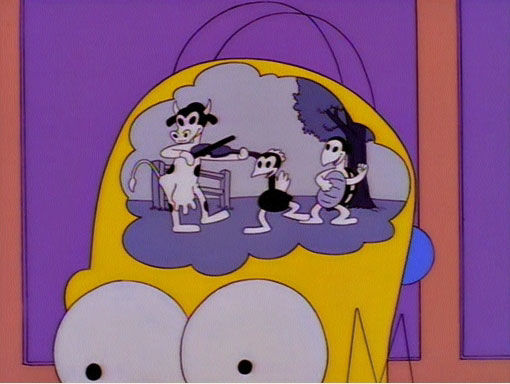 Simpsoncalifragilisticexpiala (Annoyed Grunt) cious 08x13
When Marge suffers stress-related hair loss, the Simpsons hire nanny Shary Bobbins, who speaks in song and inspires others to do so. But the Simpsons may prove too much for her. 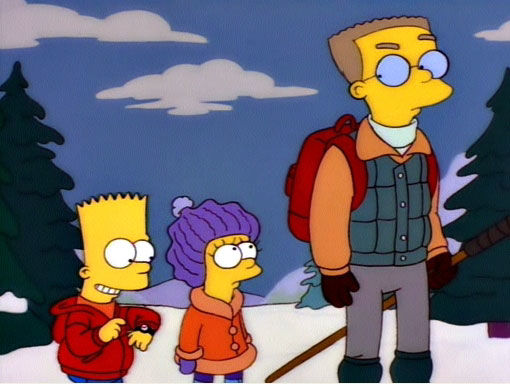 Mountain of Madness 08x12
On a company mountain retreat, an avalanche traps hiking partners Homer and Mr. Burns in a cabin. 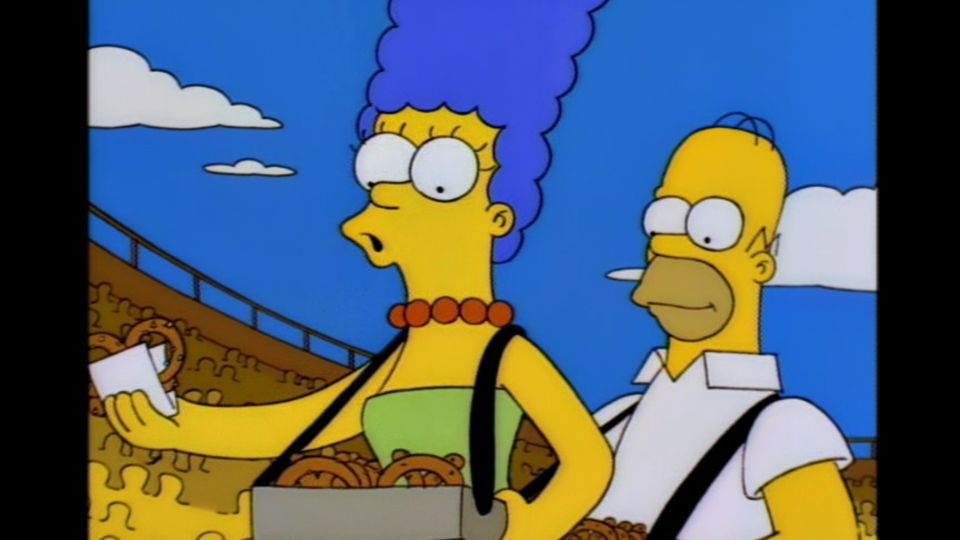 The Twisted World of Marge Simpson 08x11
A smooth talker sells Marge on the pretzel business. But when sales go soft, Homer asks crime boss Fat Tony for help. Blackboard "I am not licensed to do anything". 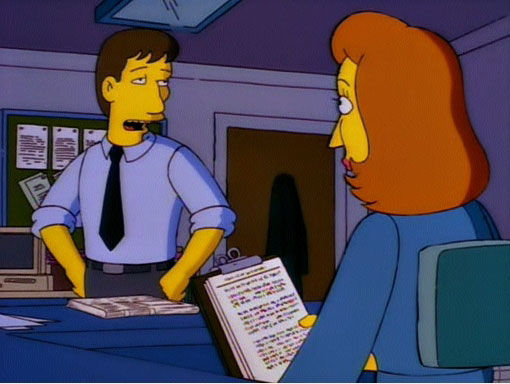 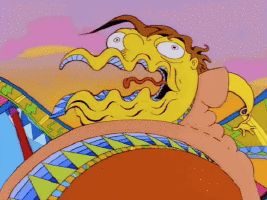 Hurricane Neddy 08x08
Citizens rebuild the Flanders' hurricane-damaged house. But Ned's guilt about criticizing their work sends him to a mental hospital. 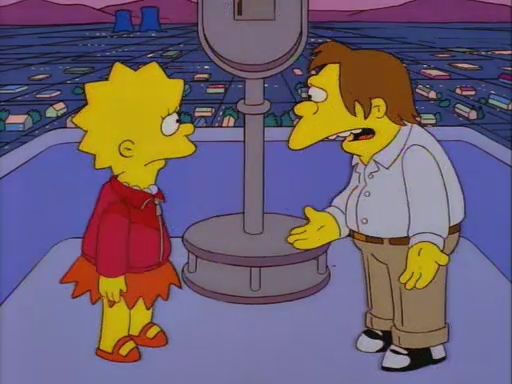 Lisa's Date with Density 08x07
Lisa develops a crush on Nelson, and then she tries to change him. Meanwhile, Homer solicits money over the phone using an automatic telephone dialer. 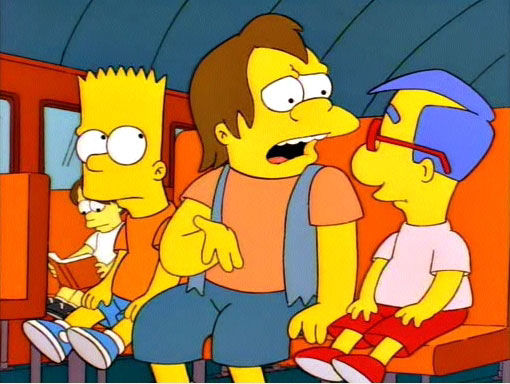 A Milhouse Divided 08x06
Milhouse's parents decide to divorce, prompting Homer to take action to prevent a similar fate for himself and Marge. 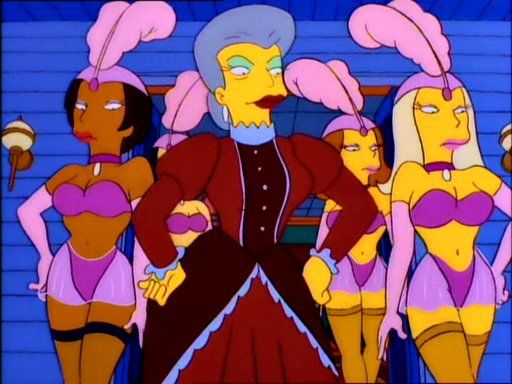 Bart After Dark 08x05
While Marge and Lisa are away, Bart becomes the right-hand man for the owner of a burlesque house. 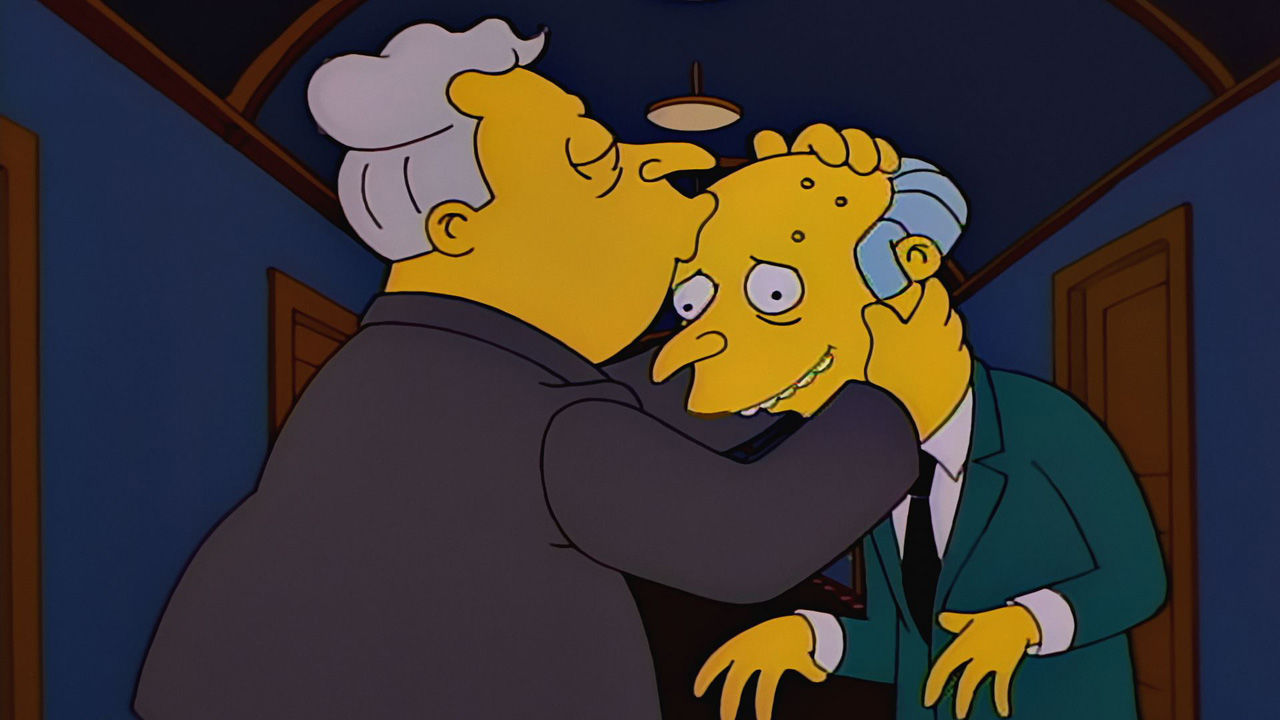 Burns, Baby Burns 08x04
Rodney Dangerfield is the voice of Mr. Burns' illegitimate son, who irritates Burns with his lack of social graces. Homer and Mr. Burn's son hatch a scheme to get Mr. Burns's attention. 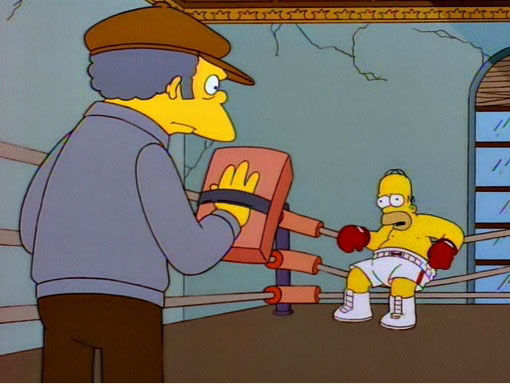 The Homer They Fall 08x03
Moe turns Homer into a prizefighter, who meets the champ in a bout called by ring announcer Michael Buffer. 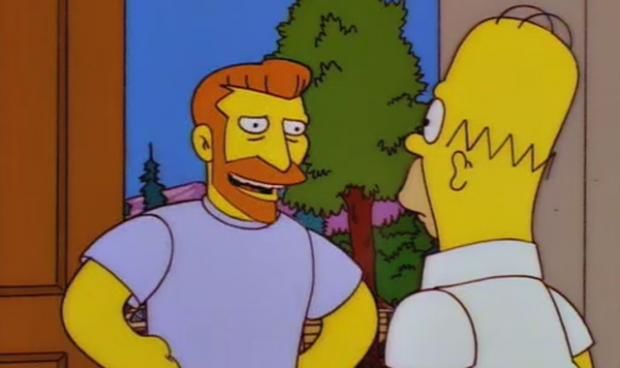 You Only Move Twice 08x02
In an idyllic planned community, Homer works for a new boss who has trouble with the government. Meanwhile, the rest of the family has difficulty dealing with the bucolic burg. 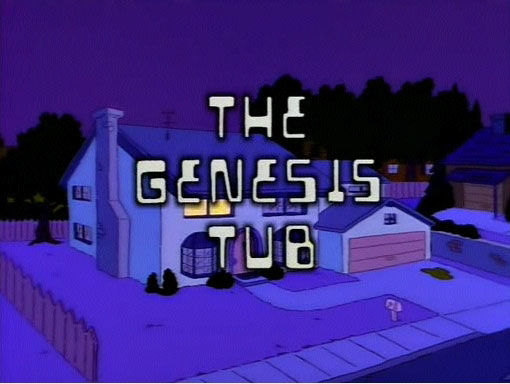