Father, Son and Holy Guest-Star 16x21
Bart is expelled from school after being accused of pulling a prank and sent to parochial school.

Home Away from Homer 16x20
Financial trouble inspires Ned to rent his rumpus room to a pair of college-aged women, who end up running a soft-core webcam from the Flanders' home without their knowledge. When Ned becomes the laughingstock of Springfield and moves his family to their dream town, "Humble, PA - Home of the Humble Figurines," an unruly neighbor moves in, forcing Homer to beg for Flanders to return. Jason Bateman guest-stars as himself. Later, after Bart is falsely blamed and then expelled for a mishap at the school-sponsored Medieval festival, Fat Tony, guest-voiced by Joe Mantegna, suggests to Marge that he enroll in a private Catholic school. After a rough introduction with a nun on his first day, Bart meets and instantly likes an Eminem-quoting priest named Father Sean, guest-voiced by Neeson. Father Sean shows Bart the cooler parts of the religion through graphic stories and comic books. Bart's growing interest alarms his parents and ultimately drives Homer to visit the church. He, too, finds himself attracted to the religion after Father's offerings of beer, pancakes and games. It's up to Marge to bring her family back to their roots. 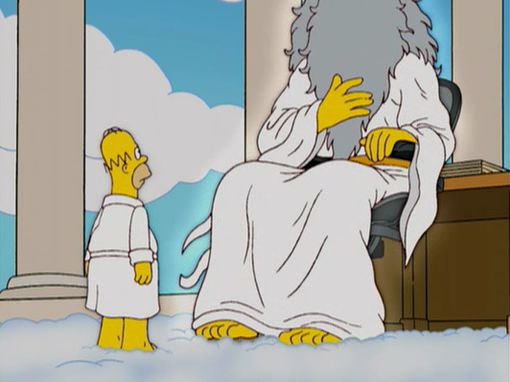 Thank God It's Doomsday 16x19
An apocalyptic movie followed by three real-life omens cause a fearful Homer to research the rapture. Believing that he has deduced when the event will happen, he begins warning others as a way to secure his spot in heaven. After a skeptical Kent Brockman reports on Homer's prediction of stars falling from the sky, there's a Krusty Special blimp accident, and Homer attracts a slew of new believers. When the rapture never comes, a discredited Homer discovers an error in his calculations and returns to the Springfield Mesa alone, where he experiences the rapture - or maybe a heat-induced dream - and convinces God to delay doomsday. 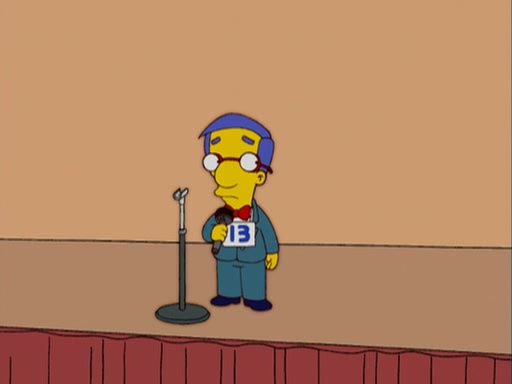 A Star is Torn 16x18
When Lisa agrees to participate in a Krusty-sponsored "Li'l Starmaker" competition, she panics when another contestant performs a better rendition of "Mockingbird." Thankfully, Homer saves the day by hammering out a manipulative tune about Springfield that leads Lisa to victory. With a win under his belt, Homer becomes a star-crazed stage father/manager, who ultimately drives Lisa to fire him. A distraught Homer counters by taking Lisa's rival, Cameron, under his wing to groom him for the finals. 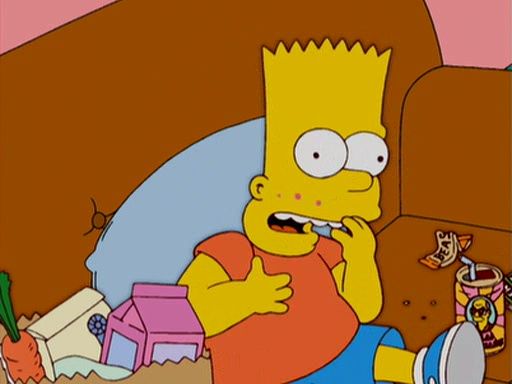 The Heartbroke Kid 16x17
Bart becomes addicted to junk food when a new vending machine is installed at Springfield Elementary. His steady diet of processed foods leads to a massive weight gain and health issues. When he's unable to stick to his prescribed low-fat diet, the Simpsons stage an intervention and ship Bart off to "Serenity Ranch - A Forced Starvation Facility," headed up by former food addict Tab Spangler. While Spangler tries to help Bart overcome his obsession, Homer and Marge turn their home into a hostel for German travelers in order to pay for the costly Serenity Ranch. 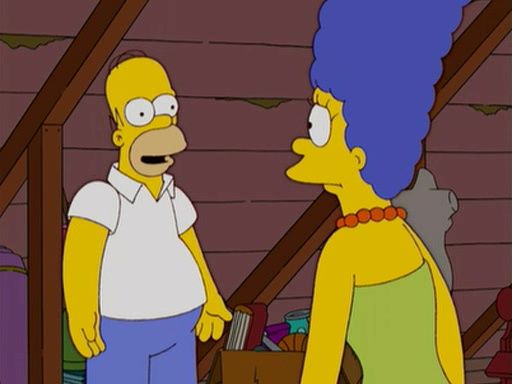 Don't Fear the Roofer 16x16
In the milestone 350th episode, Homer befriends beer-loving barfly and roofer Ray Magini, guest-voiced by Ray Romano. After discovering a shared passion for sandwiches and the Three Stooges, Homer and Ray become inseparable friends. However, Marge believes Ray is a figment of Homer's imagination and enlists the help of Dr. Hibbert to literally "shock" Ray Magini out of Homer's system. 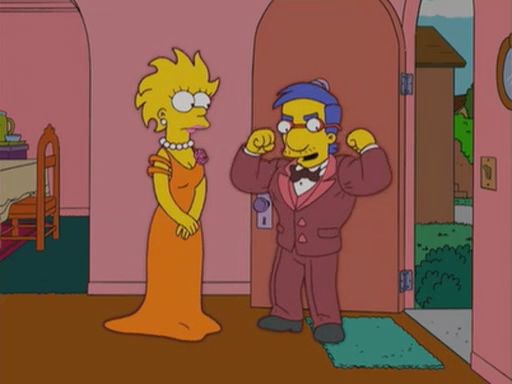 Future-Drama 16x15
When Professor Frink uses an astrology machine to ease the constant bickering between Bart and Lisa, they are given a sneak-peek into their final days of high school. In this future view, Marge and Homer are separated, Lisa is dating a muscular Milhouse and Bart is dating the girl of his dreams, Jenda, guest-voiced by Amy Poehler. Much to their disappointment, both the relationships quickly flounder. In hopes of winning Jenda back, Bart takes a job at a Kwik-E-Mart, where he becomes the local hero after saving Mr. Burns from a robber. His reward is a scholarship to Yale that was initially intended for Lisa. Bart's deeper look into the future causes him to have a change of heart, ultimately affecting his present-day sibling rivalry for the better. 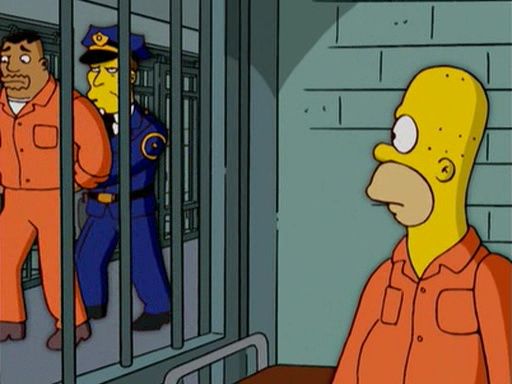 The Seven-Beer Snitch 16x14
To prove to Shelbyville that Springfield is not a hick town, Marge convinces the Springfield townspeople to fund a Frank Gehry- designed concert hall. Opening night turns disastrous after the sounds of Beethoven's Fifth Symphony drive the uninterested townspeople away, ultimately leading the hall to bankruptcy. Never one to miss an opportunity, Mr. Burns assumes the debt and turns the hall into the Montgomery Burns State Prison. Initially the prison proves to be a positive addition to the town, providing jobs to almost everyone except Homer, who is imprisoned after a lab test mix-up. Meanwhile at prison, Fat Tony puts a mark on Homer's head for being a snitch . 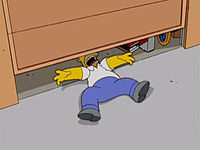 Mobile Homer 16x13
After Homer suffers a garage-door-to-the-throat incident, Marge is pressured into buying life insurance for the entire family. Much to her surprise, she finds out that Homer is uninsurable and resorts to cutting costs across the board in the household. Homer is convinced by his buddies that Marge is trying to make all financial decisions, so in an act of defiance, he buys an RV. This reckless act infuriates Marge, causing a divide between the two and ultimately forcing Homer to live in his new RV. Determined to save their feuding parents, Bart and Lisa steal the RV in hopes of returning it for a refund, but are instantly faced with obstacles. 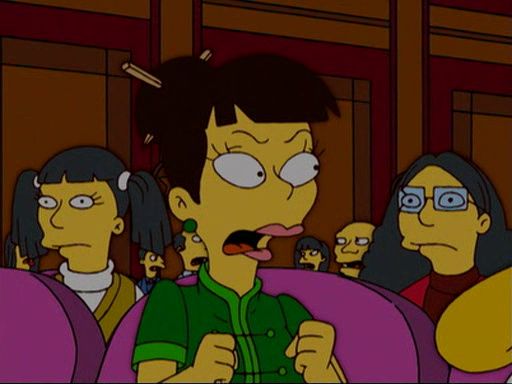 Goo Goo Gai Pan 16x12
After watching a video on menopause, hosted by guest voice Robert Wagner, Selma realizes that she missed her chance to have a baby and decides to adopt a baby girl from China. Selma encounters a bump in the road when the application asks for her husband's name. In an act of desperation, she puts down "Homer Simpson." Soon, Selma and the Simpsons are off to China to pick up her baby girl, while Homer must pretend to be her husband. When their charade is finally revealed, the functionary, Madam Yu, takes Selma's baby back. Homer and the gang must devise a plan to rescue the baby from the orphanage. 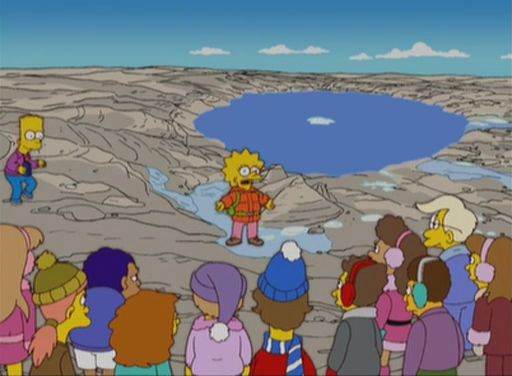 On a Clear Day I Can't See My Sister 16x11
Fed up with Bart's endless taunting and torture, Lisa enlists the help of Chief Wiggum and files a restraining order against him. After watching a restraining order video hosted by guest voice Gary Busey, Bart learns he must stay 20 feet away from his sister. When he tries to contest it, Judge Harm increases it to 200 feet, forcing Bart to live in the back yard. Meanwhile, Homer takes over Grampa's job as a greeter at the Sprawl Mart. 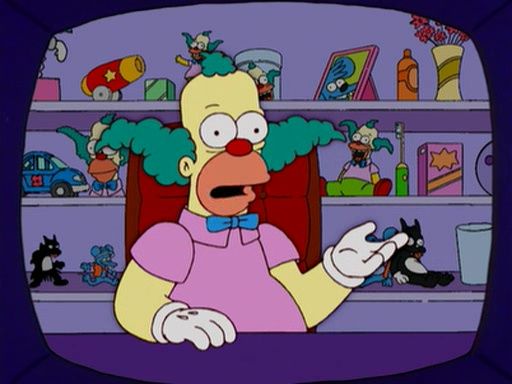 There's Something About Marrying 16x10
One of Springfield's own comes out of the closet. To boost tourism, the town of Springfield decides to legalize same-sex marriage. Homer discovers the monetary value of gay union, becomes an ordained minister via the Internet and soon marries everyone and everything in town - including a surprising someone very close to him. 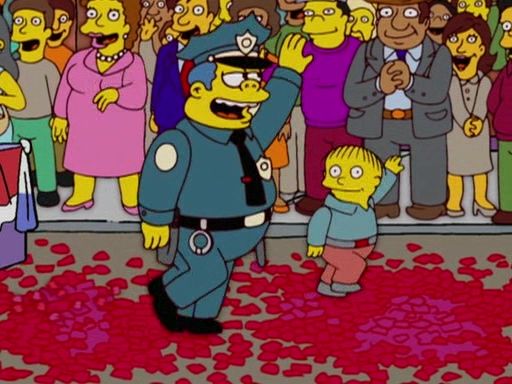 Pranksta Rap 16x09
After sneaking out of the house to attend a 50 Cent concert and getting nabbed by Marge and Homer, Bart fakes his own kidnapping, hiding out in Kirk Van Houten's bachelor pad, to prevent being grounded. It is up to Springfield's finest - bumbling Police Chief Clancy Wiggum - to save him. Inspired by an apparition of Barney Fife, Wiggum cracks the case, rescues Bart and is promoted to Police Commissioner, while wrongly-imprisoned Kirk becomes a lady's man among the felon-loving singles of Springfield. 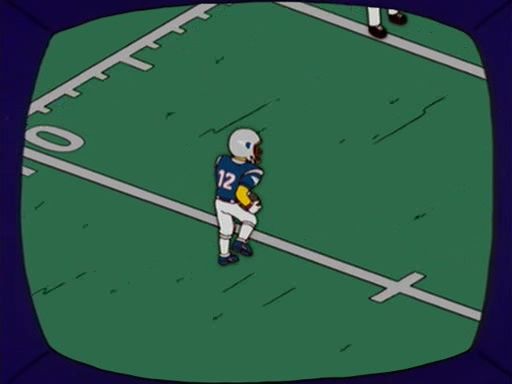 Homer and Ned's Hail Mary Pass 16x08
In THE SIMPSONS post-Super Bowl XXXIX episode, "Homer and Ned's Hail Mary Pass," after Homer inadvertently performs a wild crowd-pleasing dance at a local carnival, he is hired by several prolific sports figures - including Tom Brady, LeBron James, Warren Sapp, Yao Ming and Michelle Kwan, guest-starring as themselves - to choreograph their victory dances. After his dances prove successful, Homer is tapped to choreograph the Super Bowl halftime show. Panicked the night before the event, Homer enlists the help of his neighbor, Ned Flanders, and together they put on a nonviolent, deeply meaningful half-time show that America chastises for its blatant display of decency. 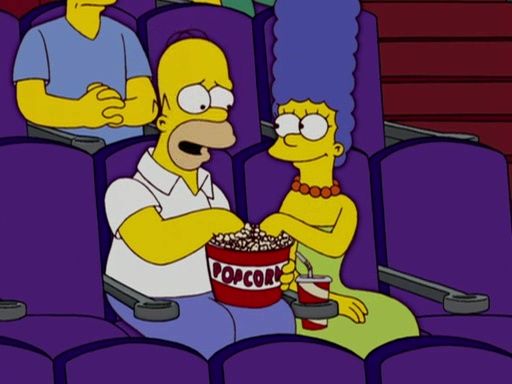 Mommie Beerest 16x07
When Moe's Tavern is shut down by the health department, Homer refinances the house to save the bar. Infuriated by this, Marge decides to protect her investment and takes an active, hands-on role as Moe's partner. Marge gives the bar a facelift and boosts the clientele, while Homer has to stay home and play Mr. Mom. Meanwhile, Moe begins to develop deep feelings for his new partner. 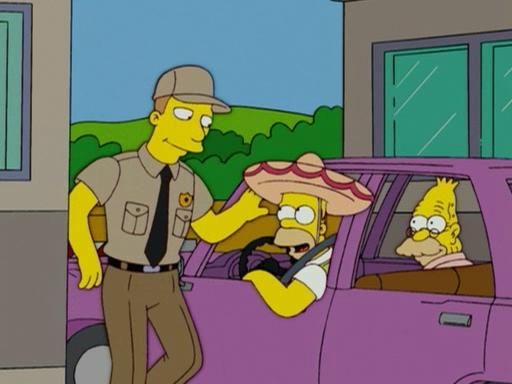 Midnight Rx 16x06
When Mr. Burns terminates the employee prescription drug program, the citizens of Springfield are no longer able to afford their very expensive but much-needed prescription drugs. In order to keep the town medicated, Homer, Grampa, Apu and Flanders travel to Canada to buy the drugs with fake Canadian health care cards. When they are caught smuggling the goods, all of Springfield rallies around them to fight for their freedom. 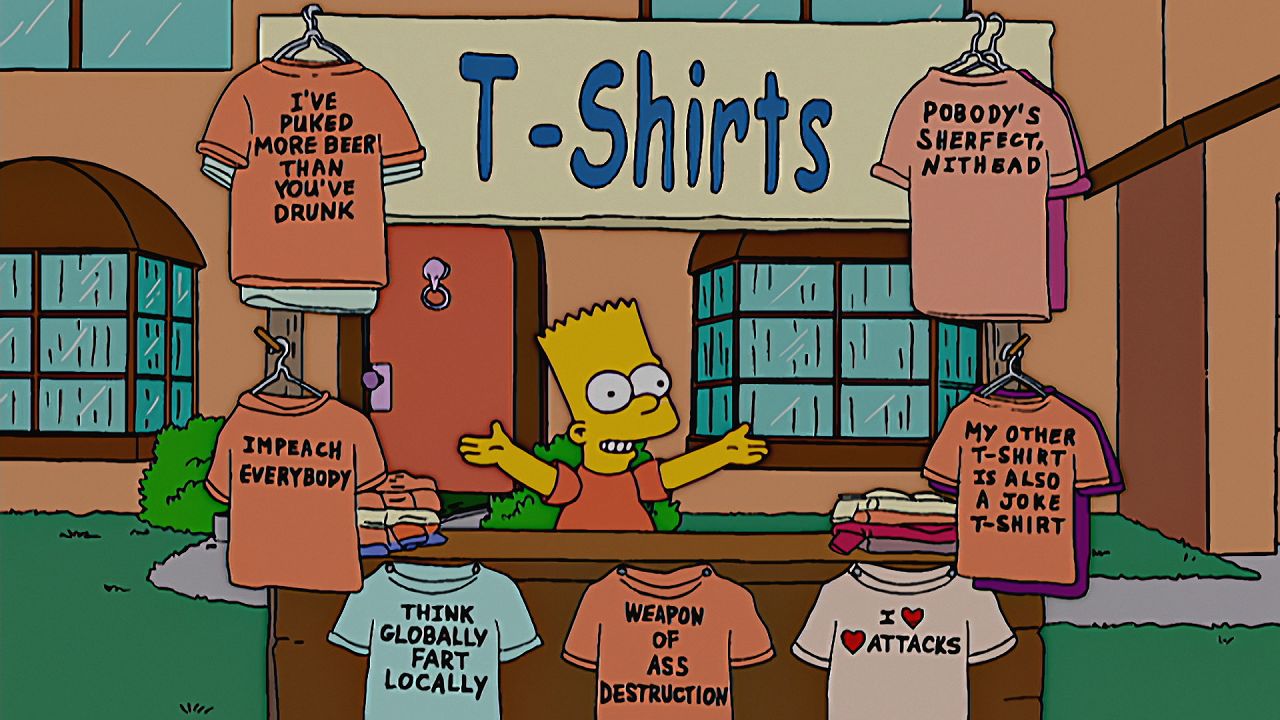 Fat Man and Little Boy 16x05
When Bart writes slogans on t-shirts, he catches the attention of Goose Gladwell, a gag gift entrepreneur, and soon becomes a t-shirt mogul. With Bart now the breadwinner, Homer feels he no longer has a place in the family. In order to feel more useful, Homer begins spending more time with Lisa, including watching documentaries by scholar Declan Desmond. But when Gladwell is revealed as a fraud, Homer steps in to show him who's really boss. Blackboard 'My pen is not a booger launcher'. 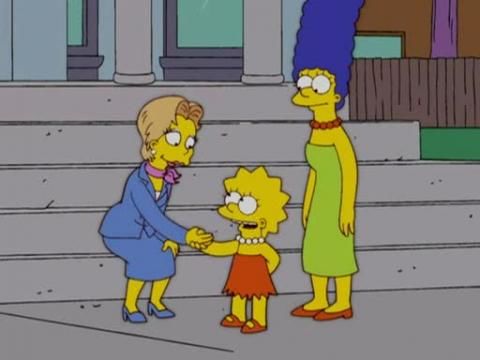 She Used to Be My Girl 16x04
Marge runs into her former high school pal Chloe Talbot, who is now a famous newscaster. Chloe is cultured, sharp-dressed and has a successful career on television. While Lisa has become enamored with Chloe's worldliness, Marge becomes jealous and wonders if she made the right decision by choosing family over a career. Blackboard 'Poking a dead raccoon is not research'. 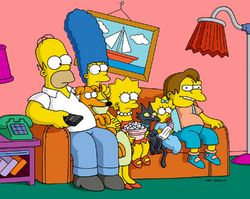 Sleeping with the Enemy 16x03
Feeling unappreciated by her own children, Marge takes in neglected son and Springfield Elementary School bully Nelson Muntz. Horrified his tormentor is now living under the same roof, Bart goes on a mission to find Nelson's parents and reunite the Muntzes. 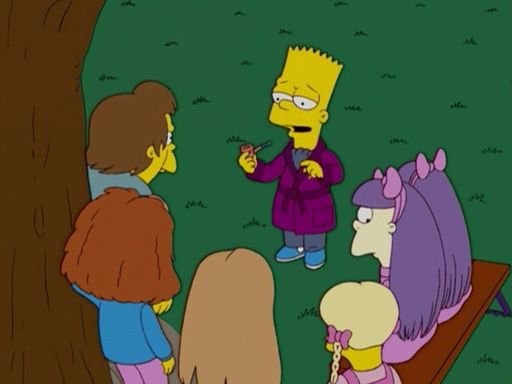 All's Fair in Oven War 16x02
When Bart fishes Homer's vintage "Playdude" magazines out of the trash, he decides to adopt the ring-a-ding-ding lifestyle of the 1970s, as interpreted by a 10-year-old. Looking for some action, actor James Caan, guest-starring as himself, drops by Bart's swinging Playdude treehouse. Meanwhile, Marge stoops to sabotage to keep up with the other contestants during the Ovenfresh Bakeoff, attended by the likes of. 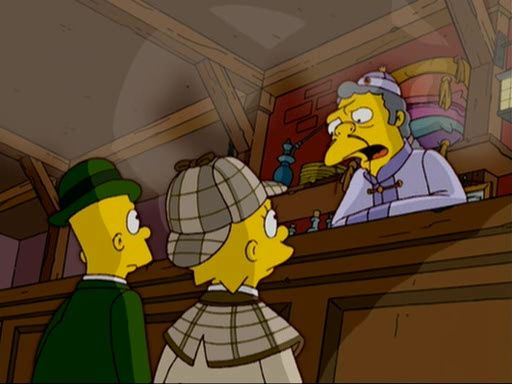 Treehouse of Horror XV 16x01
Hands out its annual Halloween treats on the "Treehouse of Horror XV" special featuring three deliciously frightful mini-episodes. In "The Ned Zone," Ned Flanders gains the power of foretelling people's deaths after suffering a head injury, and is shocked to discover that he will be the one to kill Homer. In the second short, "In the Belly of the Boss," Maggie is shrunken inside a vitamin capsule in a freak science accident and is swallowed by Mr. Burns. The final Halloween scare, "Four Beheadings and a Funeral," is set in Victorian London, where Master Detective Eliza Simpson and her faithful sidekick, Dr. Bartley, attempt to catch The Muttonchop Murderer, a Jack the Ripper-esque serial killer.