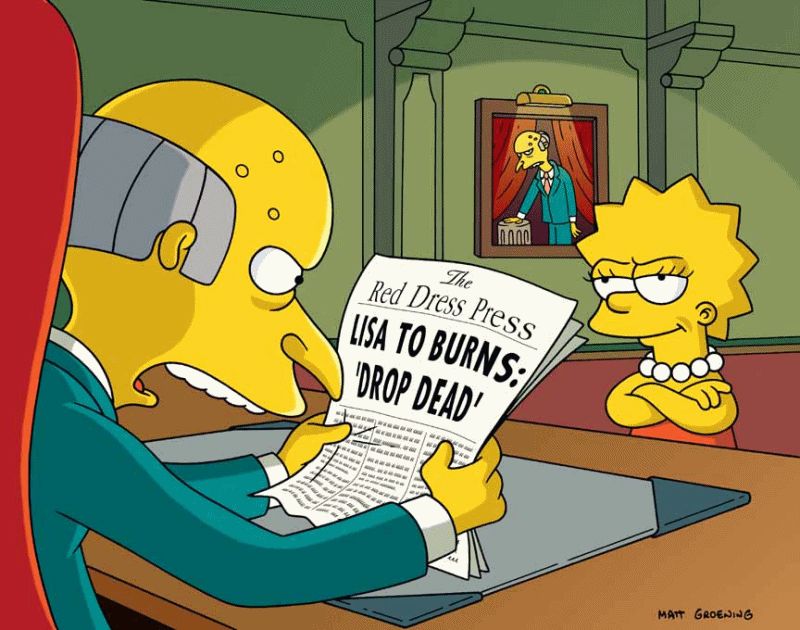 Fraudcast News 15x22
Mr. Burns buys all the media outlets in town after everyone thinks he is dead and does not care. Lisa starts her own newspaper and ends up in a war with Burns. 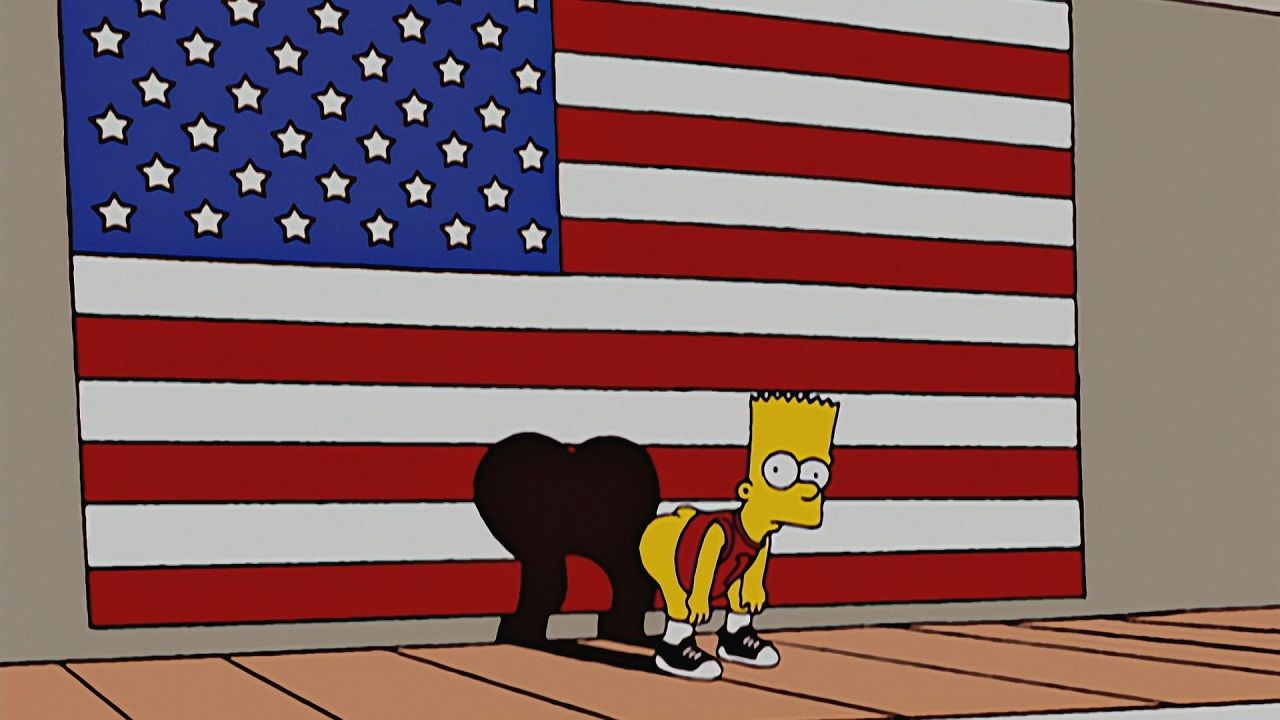 Bart-Mangled Banner 15x21
Marge and Homer work hard to get Bart to the doctor for a shot, he then goes deaf as a side effect. Later he is bending over doing a full moon and accidentally moons the American Flag and the Dante basket ball classic during the national anthem. 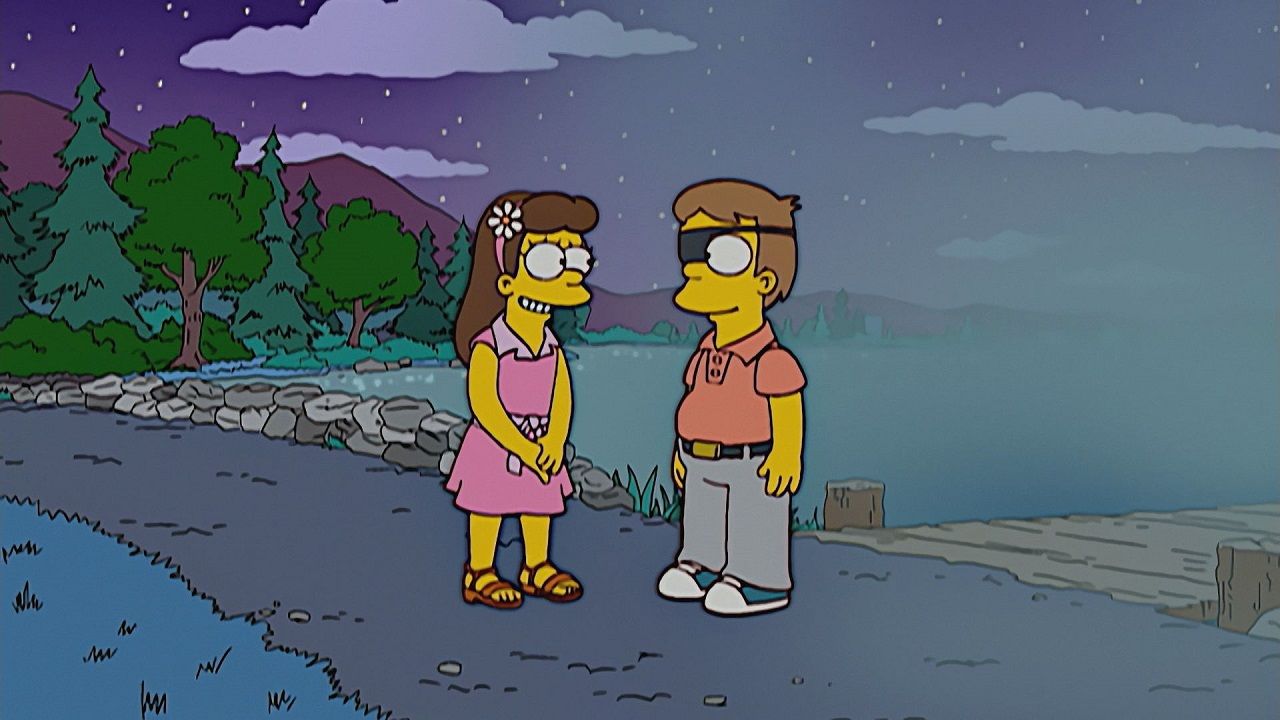 The Way We Weren't 15x20
After Bart and Milhouse play a game of Spin the Bottle in the tree house, Homer tells the story of his and Marge's first kiss. Marge and Homer then learn they were destined to be together. 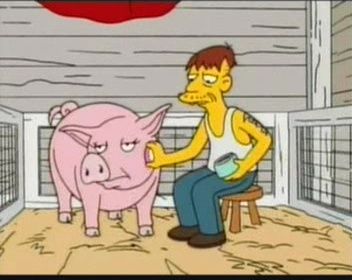 Simple Simpson 15x19
Avenging a slight to Lisa turns Homer into the city's new crusader for justice, a masked man whose weapon of choice is a pie in the face. 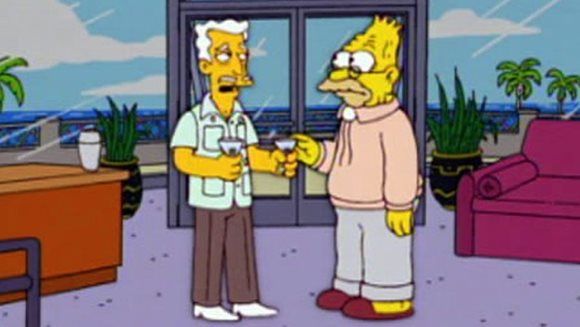 Catch 'Em If You Can 15x18
Grandpa, Bart and Lisa Simpson take off on a cross country journey when Homer and Marge just want to spend a bit of kid free time. 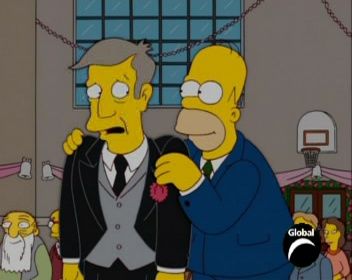 My Big Fat Geek Wedding 15x17
Skinner's cold feet near the altar also give Edna second thoughts, leading her into a rebound romance. 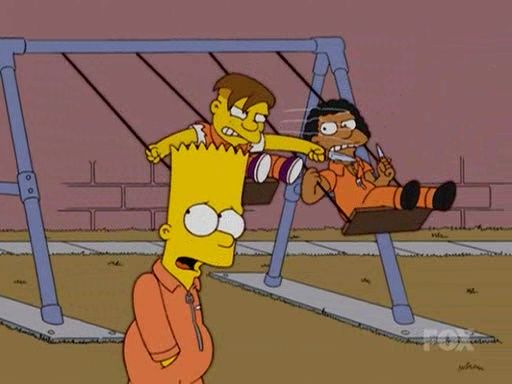 Wandering Juvie 15x16
Sarah Michelle Gellar plays a delinquent whom Bart meets in a juvenile-correction facility that's not strong enough to hold them. 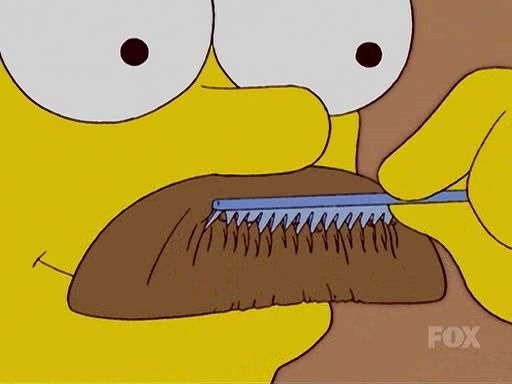 Co-Dependent's Day 15x15
After a winery tour, Marge and Homer become drinking pals, until a driving mishap prompts one to pull a fast one on the other. 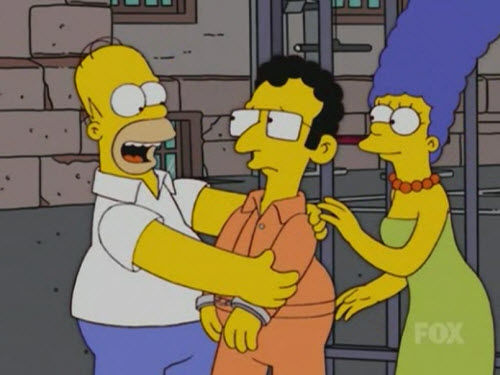 The Ziff Who Came to Dinner 15x14
Lisa finds Arte Ziff living in their attic after seeing a horror movie with Homer and Bart. Artie moves in because he owes massive amounts of money to his company shareholders. Blackboard reads 'I will not speculate on how hot teacher used to be'. 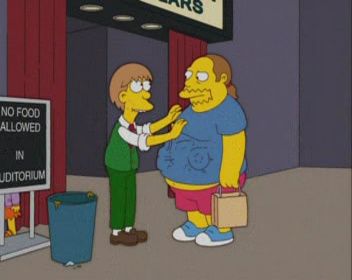 Smart & Smarter 15x13
Simon Cowell plays an admissions interviewer at a prestigious pre-nursery school where Maggie's IQ is found to surpass Lisa's, causing an identity crisis for the older sister. 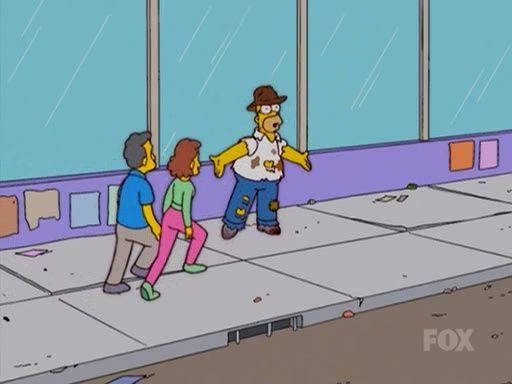 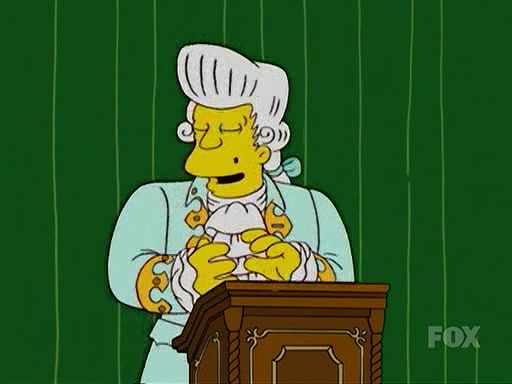 Margical History Tour 15x11
Marge talks history, with Homer as Henry VIII, Lenny and Carl as Lewis and Clark, Lisa as an opinionated Sacagawea and Bart as Mozart. 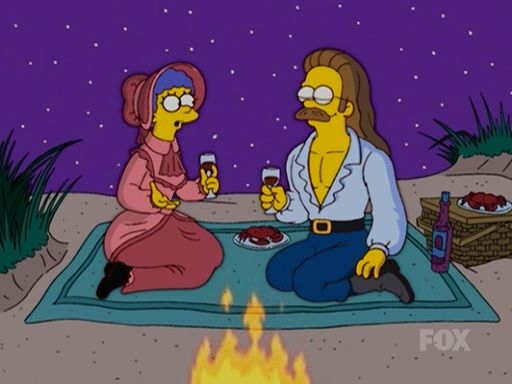 Diatribe of a Mad Housewife 15x10
Tom Clancy, Thomas Pynchon and the Olsen twins have cameos as Marge writes a novel that casts Homer in a bad light, and Flanders in a good one. 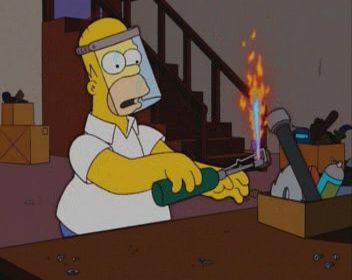 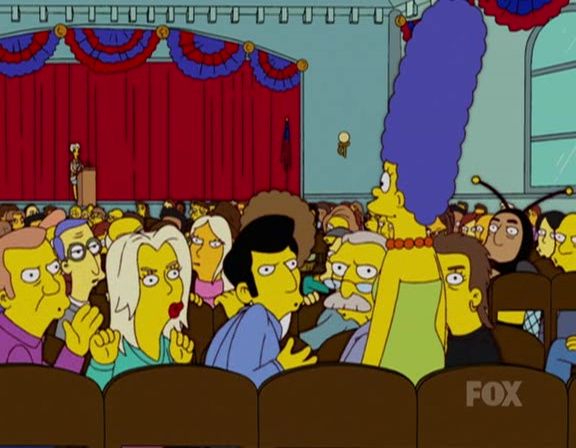 Marge vs. Singles, Seniors, Childless Couples and Teens, and Gays 15x08
Maggie is among the babies who riot at a kiddie concert, prompting a backlash by single childless citizens, who organize against kids and families. 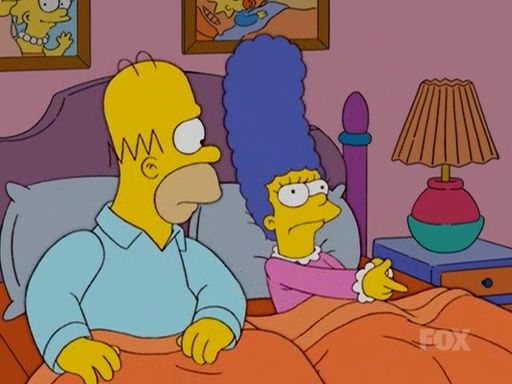 'Tis the Fifteenth Season 15x07
A version of "A Christmas Carol" causes Homer to go from greedy to giving, prompting jealousy in Flanders, who gives gifts to everyone in town. 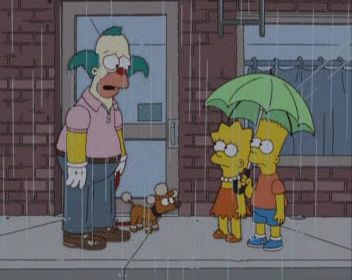 Today I Am a Klown 15x06
Krusty's rabbi father helps him prepare for his bar mitzvah, which includes Mr. T; Homer guest hosts for Krusty and is a hit. Dan Castellaneta, Blackboard reads 'over forty &amp; single is not funny'. 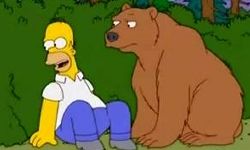 The Fat and the Furriest 15x05
Homer goes on a mission of revenge against a bear that attacked him during a visit to the dump and creates a home made bear-fighting suit. Blackboard 'My pen is not a booger launcher'. 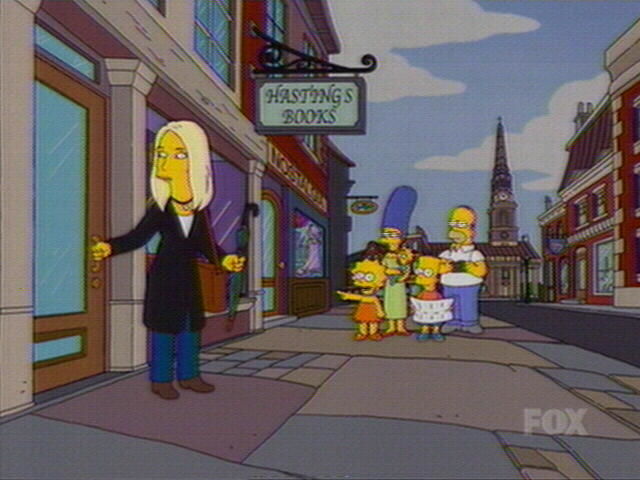 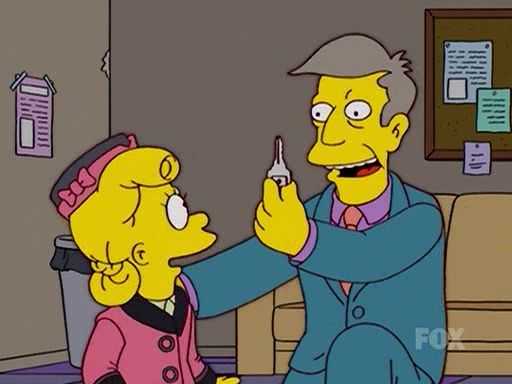 The President Wore Pearls 15x03
Lisa is made to look like Eva Peron in this loose parody as faculty members undermine her student-body presidency. 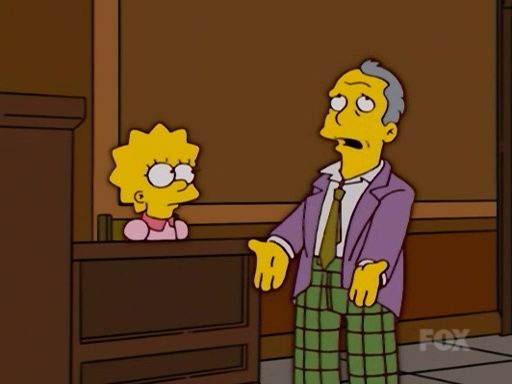 My Mother the Carjacker 15x02
Surfacing to see her son, Homer's fugitive mom is caught and tried for sabotaging a lab owned by Mr. Burns, who's loath to let a grudge die. 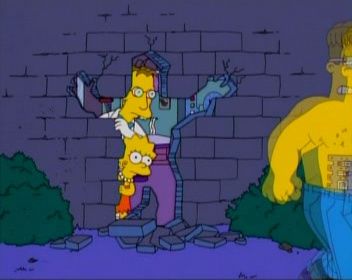 Treehouse of Horror XIV 15x01
A Halloween trilogy (XIV), with Jennifer Garner, Oscar De La Hoya and Jerry Lewis as Professor Frink's father, who goes on a rampage after being brought back from the dead. Homer kills death in the first tale and has to become the grim reaper; In the Second tale Professor Frink wins a Nobel prize and then brings his father back from the dead in a Frankenstein parody; in the 3rd tale Bart gets access to a watch that changes the fabric of existence and along with Milhouse they cause trouble in Springfield.