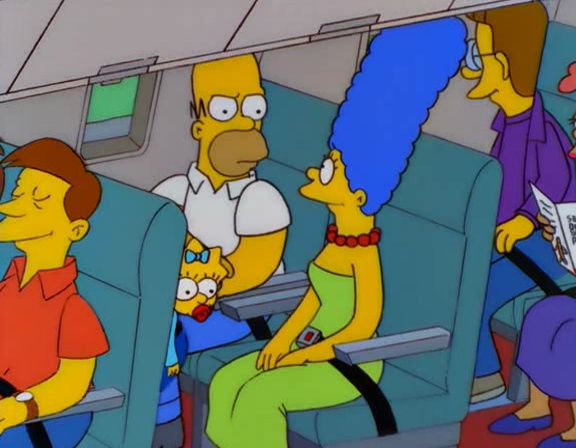 30 Minutes Over Tokyo 10x23
After getting tips on thrifty living, the family takes a vacation to Japan, where they appear on a game show to win plane tickets back home. Blackboard: 'I'm so very tired'. 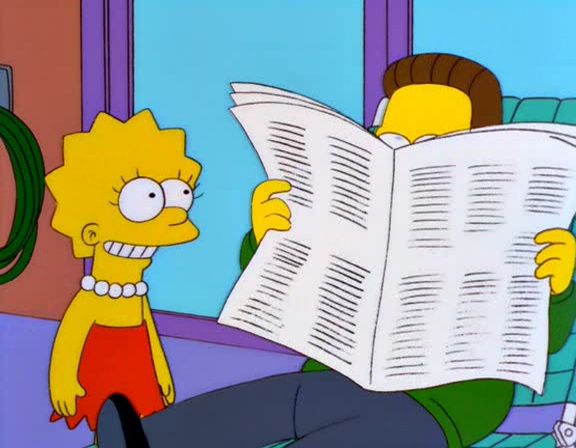 They Saved Lisa's Brain 10x22
Lisa is invited to join local members of Mensa, who take a complaint to City Hall---and wind up running it. Blackboard: 'No one wants to hear from my armpits.'. 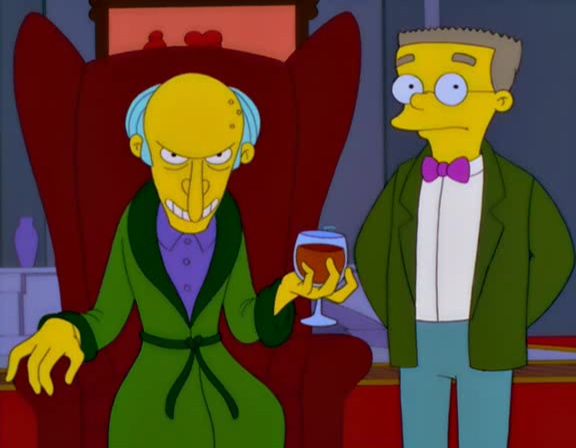 Monty Can't Buy Me Love 10x21
After another billionaire makes a memorable impression on Springfield, Burns asks for Homer's help on a quest for popularity, which eventually takes them both to Scotland. 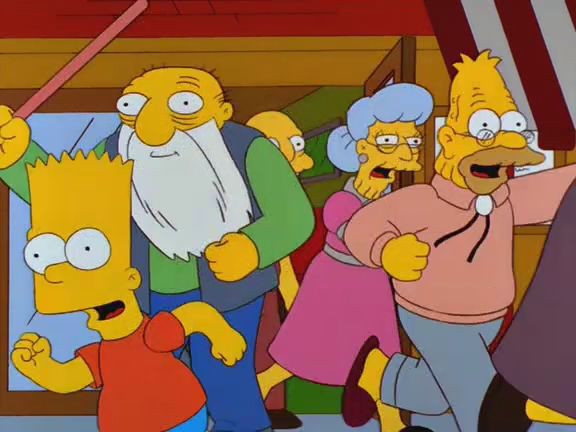 The Old Man and the "C" Student 10x20
Bart puts on a show that causes Springfield to loose hosting the Olympic Games. For punishment, he is forced to volunteer at Grandpa's retirement home. 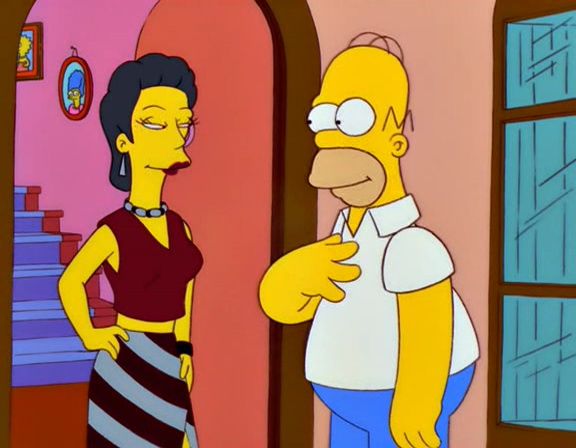 Mom and Pop Art 10x19
Isabella Rossellini plays a gallery owner who sees art in the concrete mess that results from Homer's attempt at building a barbeque. After the piece sells, she arranges a one-man show. 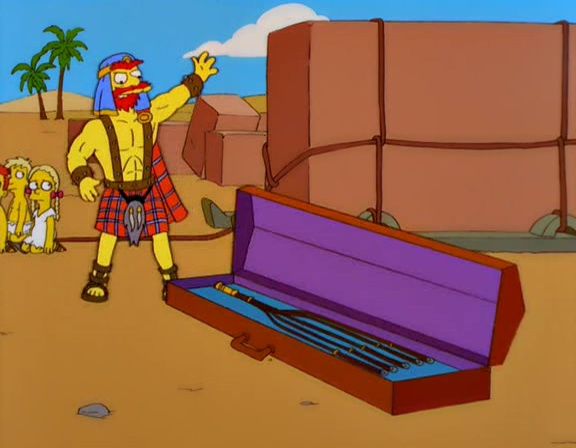 Simpsons Bible Stories 10x18
The family's biblical dreams include Homer and Marge as Adam and Eve, with Flanders as God; Milhouse as Moses; and Bart as David battling Goliath's son ("this time, it's personal"). 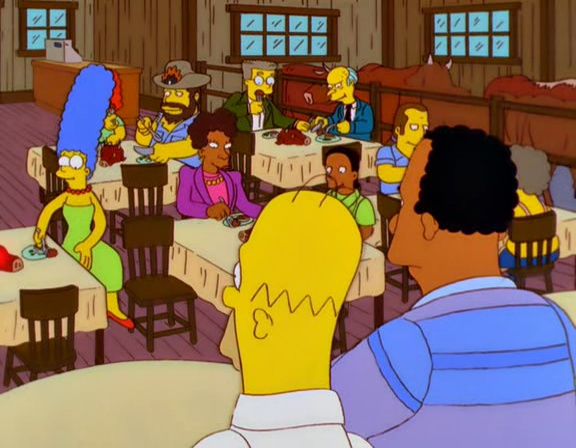 Maximum Homerdrive 10x17
Truck drivers target Homer after he blabs about an industry scam while filling in for a recently deceased driver. 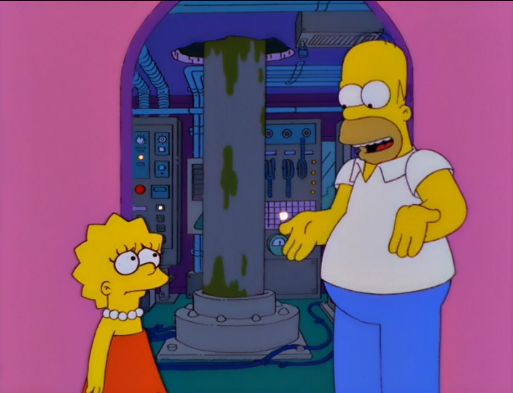 Make Room for Lisa 10x16
Homer damages the bill of rights at the museum and gives away Lisa's room to compensate for it. Lisa has to move in with Bart. Marge discover that Maggie's baby monitor is picking up local phone calls. 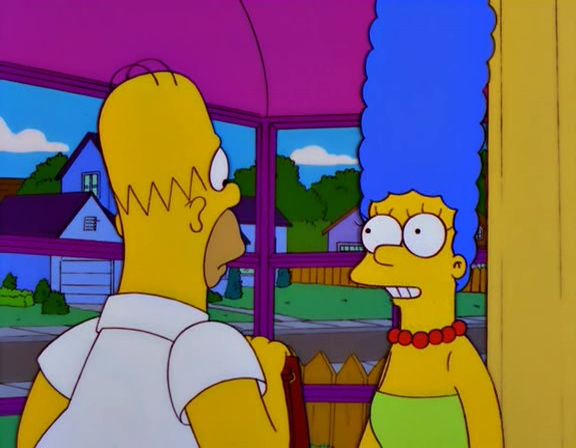 Marge Simpson in: "Screaming Yellow Honkers" 10x15
Marge gets a new sports utility vehicle and develops a bad case of road rage. She then has to go to driving school.

I'm with Cupid 10x14
Apu invites Homer and Marge over to his house for dinner and Manjula finds out that most American men do not work 7 days a week 12 plus hours a day and flips out. Apu then begins a series of daily gifts leading up to Valentines day for Manjula which causes all the other wives in Springfield to get Jealous of the attention she is getting from Apu. This causes the men of Springfield to be in the doghouse with their wives and them to be mad at Apu. 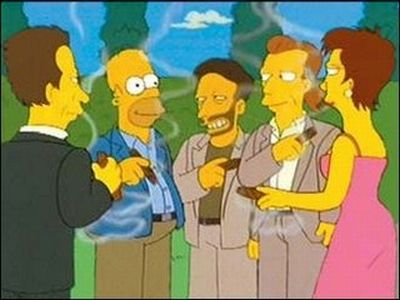 Homer to the Max 10x13
Homer discovers a cool Tv character with his name and then they turn the character into a dummy and Homer becomes mortified. He then changes his name and a lot of things change for him. 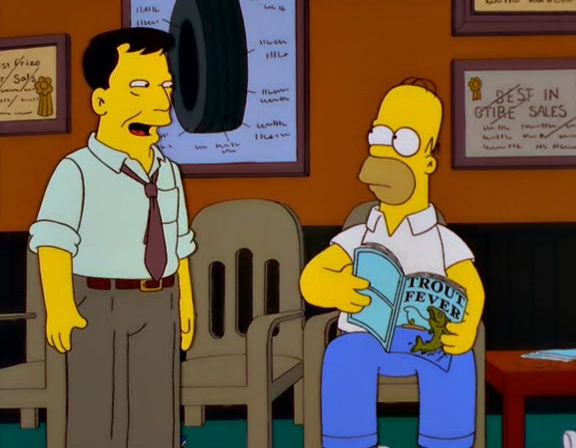 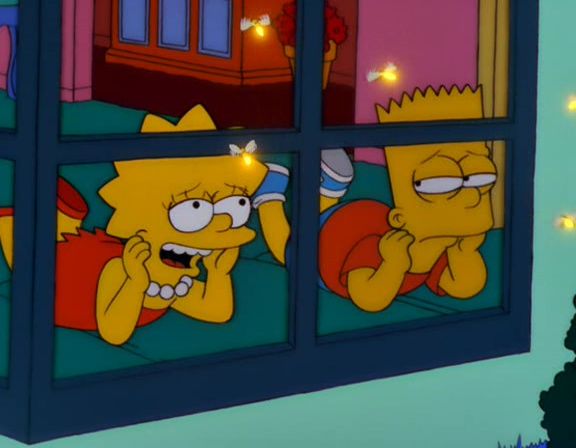 Wild Barts Can't Be Broken 10x11
Wiggum declares a curfew for kids, who are being blamed for school vandalism committed by a drunken Homer and friends. 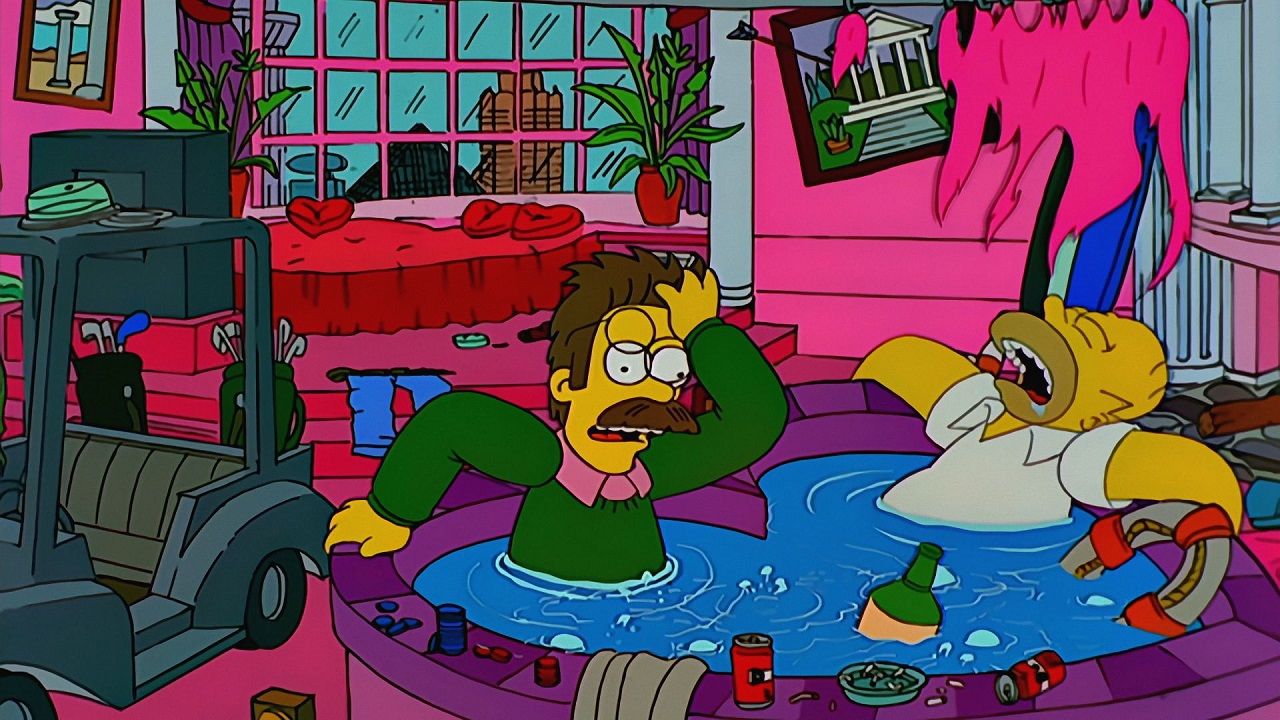 Viva Ned Flanders 10x10
Ned is feeling depressed and Homer talks him into going to Las Vegas. After arriving, they spend a wild night on the town and wake up married to two Las Vegas wives. Blackboard 'My mom is not dating Jerry Seinfeld'. 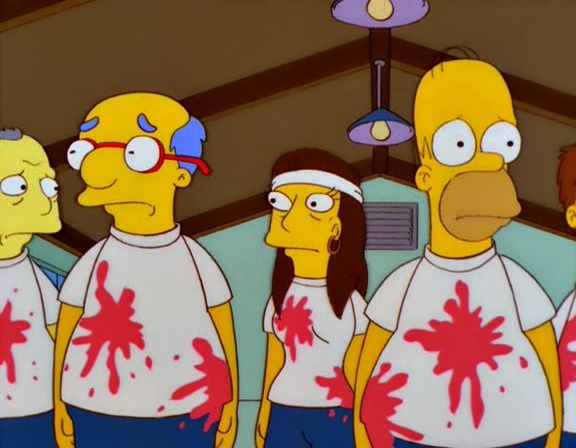 Mayored to the Mob 10x09
Homer becomes the mayor's bodyguard and puts a stop to a crooked operation involving Fat Tony, who vows revenge on the mayor. 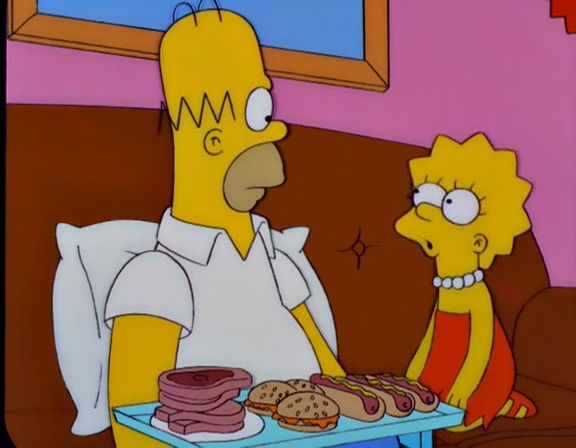 Homer Simpson in: "Kidney Trouble" 10x08
Homer takes the family on a trip and does not stop on the way home so Grandpa Simpson can go to the bathroom. This results in Grandpa needing a kidney transplant and Homer has compatible kidney's with his dad. 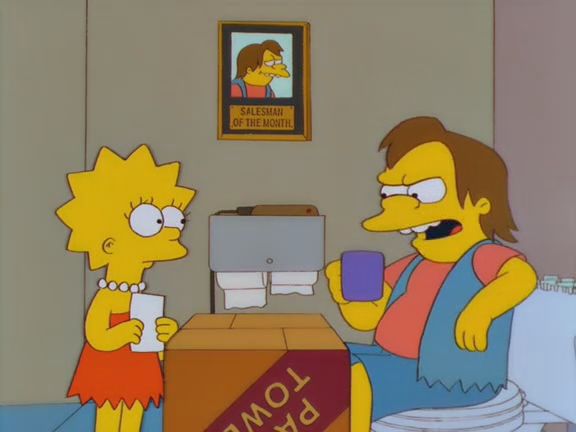 Lisa Gets an "A" 10x07
Lisa gets sick then does not study and ends up buying test answers from Nelson. 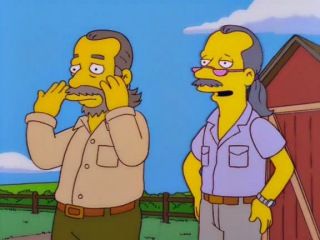 D'Oh-in' in the Wind 10x06
In a quest to discover his middle name, Homer meets some of his mothers old hippie friends. He then starts to live a hippy lifestyle. 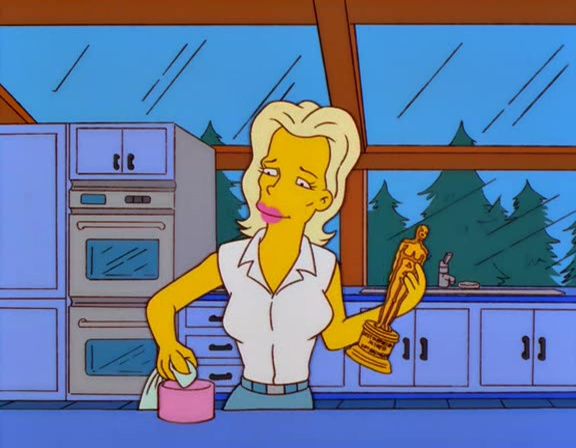 When You Dish Upon a Star 10x05
Homer becomes an assistant to Kim Basinger and Alec Baldwin (and their houseguest, Ron Howard), none of whom are interested in his screenplay. 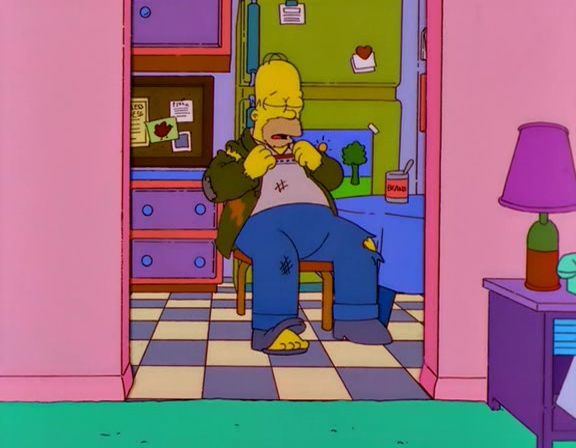 Treehouse of Horror IX 10x04
The ninth Halloween show. Included: Homer turns evil after a hair transplant; Bart and Lisa get trapped inside their TV; the alien Kang is revealed as Maggie's father. 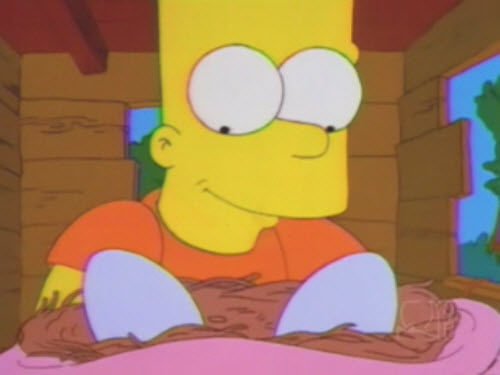 Bart the Mother 10x03
After an accident with a gun, Bart becomes the caretaker of the eggs from a birds nest. 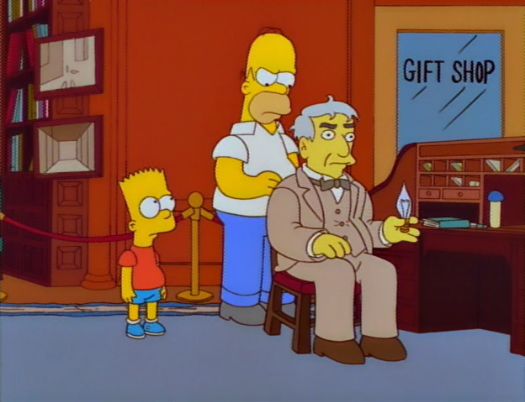 The Wizard of Evergreen Terrace 10x02
Homer goes through a bought of midlife depression and tries to overcome it with a string of inventions inspire by Thomas Edison. 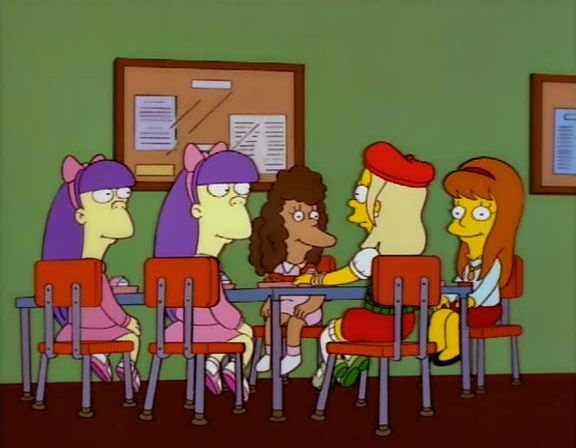